Deforestation, the destruction of dense forests in the tropics, is a significant contributor to global warming. The countries responsible for deforestation lack the economic incentive and the resources needed to stop deforestation without assistance from the major industrial countries.

The importance of deforestation
Deforestation reduces the amount of CO 2 that can be absorbed by plants and soils. Burning felled trees, slash and burn agriculture, and forest fires contribute to CO 2 emissions as well. Deforestation also results in a loss of biodiversity due to habitat destruction.

According to the World Resources Institute, deforestation is equivalent to the annual emissions of 400 million automobiles.

The major industrial countries will have to provide incentives for countries to preserve their forests. The countries that account for most deforestation have little or no economic incentive or the resources needed to reduce deforestation. They are not major contributors to global greenhouse gas emissions.

How much land is lost?
Ninety-five percent of deforestation takes place in the tropics. The United Nations Food and Agriculture Organization states that between 2015 and 2020, the rate of deforestation was estimated to be 10 million hectares per year, down from 16 million hectares per year in the 1990s. This is a land area of about 39,000 square miles, the size of Virginia that is lost each year.

Almost half of the deforestation occurs in Brazil and Indonesia. Over 70 percent of Brazil’s deforestation is driven by cattle ranching. In Indonesia, it is clearing land for palm oil production for foods and industrial and commercial products such as soaps. A small percentage of palm oil is used to produce biofuels. In Africa, the main driver is subsistence agriculture such as slash and burn agriculture and charcoal production. 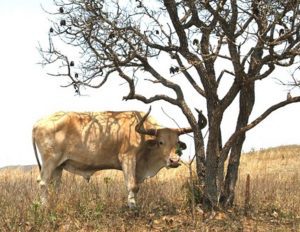 What can we do?
The developed economies are the major sources of greenhouse gases. They are the main markets for commercial products that cause forest destruction need to provide incentives to preserve and expand the world’s tropical forests. A carbon fee or tax or carbon offset payments could provide funding. Actions could include purchase of forest land, payments to preserve and maintain forests, and payments for planting new trees.

Increased crop yields through better agricultural practices would reduce the need to clear more land for agriculture. There could be import restrictions such as on beef exports from Brazil.

There should be a major effort to plant billions of new trees to offset deforestation and increase the absorption of CO 2 from the atmosphere. A total land area roughly the size of the U.S. is thought to be suitable for planting new forests. This could increase the world’s forested area by one-third without taking land from agriculture. This area could support an estimated 1.0 trillion new trees, compared to a total of about 3.0 trillion trees in the world today.

The countries with the most potential for new forests, afforestation, are all in Africa; Rwanda, Uganda, Burundi, South Sudan, and Madagascar. In addition, Russia, the U.S., and Australia also have major potential to restore forests.

This is another situation where a large global effort is required by the U.S., China, Europe, and other developed countries to provide the resources and incentives needed before other countries will reduce deforestation, plant trees, and improve agriculture.